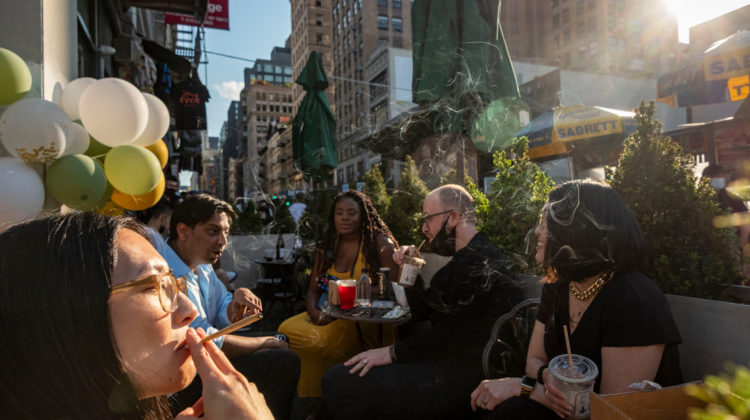 Happy Munkey, co-founded by Vladimir Bautista and Ramon Reyes, was one of the first to start the NYC cannabis speakeasy movement. NBC New York did a story on these covert locales in 2021 when they were much more of a secret. Bautista told NBC, “People were already smoking, there’s always been cannabis in New York, so it was just creating a safe space for people to gather.” Most of Happy Munkey’s events during this time were held behind closed doors and weren’t even announced until just hours before.

Today, public cannabis consumption in New York City has shifted in a new direction, with some shops creating lounge areas for people to relax and enjoy cannabis. While it’s not as numerous as bars, there are still quite a few locations where people can go to spark up.

Empire Cannabis Clubs gives people the opportunity to relax and enjoy cannabis in a lounge setting. Their clubs can only be accessed if you have a members account, which can be purchased on their website. Dj MacSkillit on Google gave the shop five stars, saying, “I [don’t] want to share too much because that will ruin the surprise. This is a 1st class dispensary reminiscent of California and New England in its services.”

Hemp Lab NYC is a cannabis dispensary located in Green Point that reportedly has “the ultimate vibe.” The location provides coffee along with an outdoor space to relax. Emerald has reviewed them in the past, saying the “experience was great—getting sealed packages of federally compliant CBD flower from a local store is truly the dream, and what’s better still is how yummy they smoked.”

Cafe Cannal claims to be New York City’s first cannabis café and lounge as per their website. As the name suggests, they sell an assortment of CBD-infused pastries and coffee. They also have a number of other cannabis products for sale. Consumers can even enjoy their own cannabis in one of their outside spaces. Cafe Cannal is a female-owned café promoting inclusivity and acceptance. Visitor Lion Lavender said in one review that it was a “good experience. Whenever I come in I’m always greeted warmly.”

Astor Club is a cannabis speakeasy with a more discrete approach. Like Empire Cannabis Clubs, their events are members-only.

Rise Radio in Brooklyn looks like any other restaurant or bar featuring a number of vegan dishes, but it’s also cannabis-friendly. They’ve promoted their bar as, “A safe, inclusive community space focused on good vibes only!”

Freaky Dog is different in its approach to being a cannabis lounge. They advertise their “Work’n’roll” location as a co-working space that provides a place for people to light up and get creative. Members have access to a number of amenities and are able to visit the location to get work done while rolling up.

The Bamboo Cafe opened in 2021 and is Brooklyn’s first recreational cannabis lounge . Their space is available to members and has a cafe area along with a game room and gift shop. They work in partnership with Taste NYDC.

Come Back Daily is so much more than your average cannabis shop. Their location(s) feature a discovery bar, “where shoppers can learn about CBD and sample various products with the help of our expert staff.” Co-Founders Steve Phan and Waseem Ghattas opened up their business after seeing the benefits of cannabis first-hand and deciding they wanted to share it with the public.

Stoned Pizza is both an edible and smoke lounge that offers a variety of different cannabis-infused pizzas and other side dishes. They also have plenty of cannabis products available both in-store and for delivery.